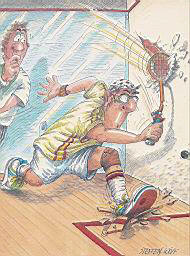 You can find out where we play or join us for a friendly game of squash at our Club Night by checking out the squash club calendar on the right and using the map below: